TRIGGER WARNING: This story contains photos of surgical results from Malignant Melanoma, which may trigger you to run to the dermatologist for a checkup. No, I am not sorry if it means one person is saved, please read on.

It was just a little bit of a spot. It had been there since I slipped in the kitchen and slammed my shin against the door frame to the porch. Call it coincidence, call it Godly intervention, but that little spot saved my life.

The spot started out as a fairly large hematoma – the medical name for a blood blister – sitting smack on the ridge of the shin bone of my right leg. Overtime-how long really? A Year? Half a year? I cannot recall, but over time the blood blister shrunk from its original raspberry size to a bit of a pencil point. But it never really left my leg.

Meanwhile, I was enjoying life- sunning on Block Island, boating, kayaking, swimming, gardening. All my usual outdoor activities garbed in only swim gear or shorts and a tank top. No hat. No long sleeves. And no Sunscreen.

But really, the time bomb had been launched decades before. As a child of the 70’s and a young woman of the 80’s, sun worship was my thing. I recall foil blankets and silver lined face reflectors, baby oil and iodine, and lots and lots of sun-in for the hair (no hat). Worse, during the winter months or before a big vacation/event/date, sun beds would be where you would find me. I had the perpetual tan, so to speak. And I know I wasn’t alone. You did too.

And that’s where the problem lies. I can cover up all I want now (and I do for the most part when it’s feasible). I can slather 75 strength sunscreen on my skin, zinc oxide my nose, and wear sleeves and long pants all season long. The damage is done.

So, all that is left is assessment, regular checkups by a qualified dermatologist. And by regular, for those without a history of skin cancer, that would mean annual.

“But Sondra, is skin cancer really that bad?”

Melanoma is the deadliest skin cancer. The rest of the skin cancers just eat your flesh away slowly, killing your soul and pride for sure. But Malignant Melanoma is deadly. It goes deep into the derma. It travels. Bob Marley died from it. A small brown spot under the bed of his nail. Innocuous in its presentation. A little blip really. Deadly.

Worse, Melanoma can be invisible. A spot on your kidney, brain, or under your eyelid. A dear school friend recently lost his sister to Malignant Melanoma in her eyes, a ten-year battle for her. She was a great mentor and supporter when I was going through my cancer experience. She received care locally and as far away as Texas – brilliant specialists all trying to help her not only defeat the disease but keep her sight as well. But in the end, the Melanoma was determined.

As I said, my blood blister on my shin never really went away. It shrunk to a pencil point. And then over a few months it started growing. Irregular and a bit bumpy. On the day I was diagnosed, I was seeing a dermatologist for something entirely unrelated – psoriasis. After the check up for that, I randomly and spontaneously said “Can I show you something?” and without waiting for doctor’s response, I lifted the pant leg on my right side to reveal a one-half inch brown blob, now positioned about 3 centimeters left of my shin, in varying shades of brown, looking like an ink spot. Or a drop of barbecue sauce. Somehow, I knew something was not right.

Doctor stopped mid clean up of his tools. He put down his pen he used for charting and rolled his stool closer to me. Without asking a question, he patted the paper draped exam table and said, “Jump up here” as he rose and exited the room.

Within a few minutes he re-entered pushing a dolly filled with surgical tools, followed by two of his nursing staff. He dropped some goofy glasses onto his eyes and before he even touched the brown spot he said, without drama “Well, that’s a melanoma and what I need to determine today is what stage it is at currently.” A quick spray for numbing, a punch tool for removing a fairly large cylindrical sample, and some quick stitches to close the wound and I was propelled into a new phase of life. The Cancer phase. 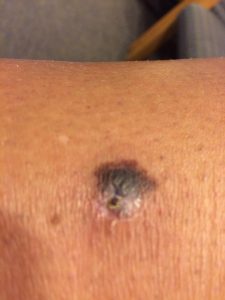 A day later the biopsy came back positive. Malignant. His team worked quickly to get me an appointment at UCONN Health Centers’ Carol and Ray Neag Comprehensive Cancer Center in Farmington. I cannot say I was frightened; I don’t really think I was. I was determined however. I was focused. I was obsessive about getting this done- whatever this turned out to be.

Two days later I drove alone up to the center. I got this, I thought, no need to make a fuss. We’ll do the surgery and be done with this now. In that moment I felt at peace. Until I swung open the large glass doors to the building.

Walking into the cool air of  a medical center in mid-August would normally bring a feeling of relief and comfort. But all that I felt in that moment- with the large silver words above the threshold “CANCER CENTER” glaring menacingly down at me – was a chill in my soul. Never had I felt so close to the end as I did that morning, standing there in the antiseptic foyer, the hum of the building ringing in my ears. CANCER.

Processed quickly, I was placed in a room by really compassionate people. Gowned up I waited. In the next two hours, no less than seven people – all on my cancer care team- made their way through that door. Some seemed premature: a psychiatrist was first. A lovely gesture and probably needed in some cases but I was ok, I could carry on, as long as we just got this started.

Next came a comfort care specialist who talked to me about wigs and medication for chemo side effects. I nervously played with my hair and belched quietly.

Then came a risk assessor. This was hard. I had to admit to being stupid. Just dumb and ignorant, willfully noncompliant to so many warnings in my youth. Question after question ground my pride down to dust. This was my fault and it was real.

Then came the surgeon, who talked about scheduling a surgery two days from today. No less than four days had passed since my dermatologist had taken the biopsy and declared me cancerous. And we were already in surgery. My body went into high alert. This was serious.

The anesthesiologist was next followed by my new cancer doctor. A whirlwind of information and directions, guides, and words of comfort and support. The surgery would require them to assess the extent of the Melanoma while I was under sedation. Therefore, they could not forecast what surgical results might be: it could be a little patch, it could be a large chunk. It could even by the leg, if the disease had spread drastically. I had to sign a consent to that. Take my leg, please.

I left the building in a stupor, bound down with a thick two-inch file folder of material and pamphlets, signed agreements and disclosures. Welcome to the family it said. Here take this, you may be a while.

On surgery day, my husband, aunt, and uncle accompanied me. I was in high spirits. I believed this was the end. Let’s do this! I was certain it would be a little bit of a sting to take this out and all would be well.

The pre-surgical work included some anti-anxiety meds that had me singing the UConn fight song- I mean it is UConn after all – and hallucinating that Jonathon the Husky was proceeding my gurney into the surgical suite.  I was cognizant enough to ask the team of doctors and nurses if we could pray together before we started and they obliged.

In the post-surgical recovery room, my leg was on fire.  Does this mean I have no leg? Are these phantom pains? I slowly opened my eyes and peeked under the covers. My leg was intact. But it was wrapped in the most gauze and tape I had even seen.

Doctor and my family came in just then. Outcome? He took a good portion of my shin. Skin? Definitely about 6 inches in diameter. Muscle? Sure, another few inches. Ligaments and sinew? Of course, to be sure. He thought that this carving up of my tibia area allowed him to get ‘Really good edges” as he described. The cancer had not gone deep enough to hit the lymph node highway so that was a relief. But the sneaky little brown hats had spread out across the surface of the derma and my fascia and other layers, requiring him to take a broad swath of my body to get it all. He will send it to pathology and then call me.

It’s weird to think that a part of me was at that moment traveling through the halls of the hospital without me. Just hours previous it was attached and held hostage to where I wanted it to go. But now it was under the control of someone else and traveling freely. Did it miss me? Was it as confused as I was, waking up in this post anesthetic state?

My journey home after discharge was only made tolerable by heavy sedation. I slept the afternoon away. When I awoke, despite strict orders to not uncover the wound, I had to peek. I needed to see what damage I had done. The picture below reveals what I saw. 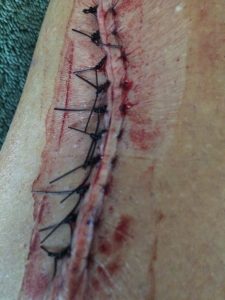 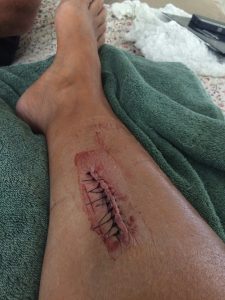 A monster limb. Crosshatched stitches, brutally ugly and reminiscent of Frankenstein arched up my right leg. The scar was unwieldy and grotesque. A fitting retribution for the abuse I had heaped on my body in my youth.

That was in 2015. I survived, as evidenced by this post. Pathology declared it a victory. My scar also survived. On my leg, most certainly, a roguish symbol of my fortitude. Ugly as sin when wearing cute dresses without hose, it heralds to everyone my continued existence despite the deadliest skin cancer having claimed a piece of me.  I consider it my Carved Beauty.

And the scar on my soul remains as well, for the years of willful ignorance with my skin. My penance is to obsessively tell everyone about the abuser “Malignant Melanoma”. It takes advantage of the young, enticing them to luxuriate in the sun’s rays, while biding its time to spring out decades later.