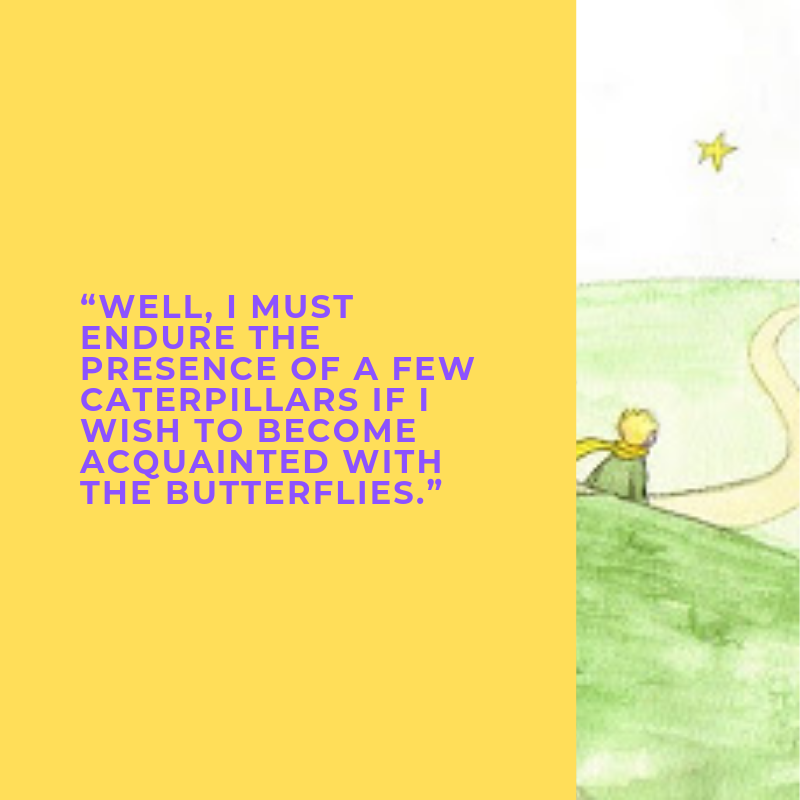 Don’t Shy Away From Difficult People

“Well, I must endure the presence of a few caterpillars if I wish to become acquainted with the butterflies.” – The Little Prince.

Many people believe the late Stephen Covey made famous the phrase “iron sharpens iron”. However, like many of his other leadership catchphrases, this was lifted directly from God’s word in the Bible through King Solomon. It is a parable that teaches us to endure.

King Solomon was given the gift of Wisdom from God and he nurtured wisdom in his people. His wisdom is captured in the Book of Proverbs. A great read if you haven’t picked up a bible yet or in a while.

Proverbs 27:17 (27 is the chapter in the book, and 17 represents the verse line. Don’t worry, you won’t have to count sentences- they’re numbered 😁) says – “Iron sharpens iron, and one person sharpens another”. This isn’t the first time the Bible, or a business leadership guru quoting the Bible, has revealed wisdom on how to endure in working together. Leadership coaches use instructional material on how to relate that can be found in Luke 6:38; in Hebrews 10:25; and in Matthew 5:23-24.

In our work within the nonprofit sector, we depend on being able to interrelate with many people. People of all backgrounds and beliefs and upbringings. Of all temperaments and inclinations. Many ‘fit’ with us – that natural smooth easy connection, building naturally to a comfortable and stable balance of friendship.

And many do not. They rasp at our good nature, they have sharp edges which make it difficult to stand near them. They repel instead of invite in. They make us uncomfortable, mostly uncomfortable with – ourselves. It’s easy to dismiss these individuals, to protect ourselves, and avoid any tensions. However, it is these very people we benefit from most greatly. We should be leaning into their sphere, not shying away. We should endure the caterpillars…

In looking back over the almost thirty years I have been leading nonprofits I can clearly see from where my greatest growth came – and it wasn’t from my work with easy people, the ones I looked forward to seeing, who shared my beliefs and validated my bitterness and distress. It was from those very people who caused it.

One of my first positions was with the National March of Dimes. I was hired to work out of an office in Connecticut. I had no justification for having received this position, which had me leading three counties in raising hundreds of thousands of dollars. But they gave me a binder of ‘things’ and a desk and a file box of index cards scribbled with donor details and said: “Go.”

The office was large and employed about a dozen people. Two of those dozen people terrified me at first. They were oppressive, demanding, and brutally frank, one might say. I cowered from their attention, frozen silently like a rabbit behind my desk whenever I heard them walk by, for fear they would turn their gaze – and their performance attentions on me. I was fearful mostly of being found out that I didn’t measure up.

Over time my terror turned to agitation and then to rebellion. How dare they. They’re no better than anyone else here. They are bullies. This was my 30-year-old voice speaking to my heart. But I was wrong.

The more I tried to repel these two, the more they zeroed in on me and my work. It was enough to make me quit! And I did, but not before securing another job. And this new job? It was a higher position with almost twice the paycheck. Now at that time, at the age of 30, my hubris and youthful ignorance prevented me from seeing the truth of this new situation. The honor bestowed upon me by their unmitigated attention was precisely what caused me to be promoted into a new more profitable role.

Without their demands for perfection and their laser gaze on meeting performance standards, I would be just another employed commodity of no interest or benefit to any other organization. But the accomplishments achieved in this first position, under the pressure of these two sharp-edged individuals, set in motion a trajectory that has led me to where I am today.

In each progressively more important role, I was challenged and pressed against iron to hone my skill and value by people who wore me out emotionally and had me questioning my sanity. Even up to my last corporate position as Vice President of a multi-hospital network, the sharpening became more intense and painful as the jobs grew, but the sharpening never let up.

Who is causing you pain? or rather- Who are you being sharpened by? If you can’t think of anyone right now, then you need to stop shying away from those challenging people in your life. Because without them, your refinement will not happen. Reject your status quo. Go find that one person you avoid and press into a relationship with them that causes their iron to hone your greatness. Endure!