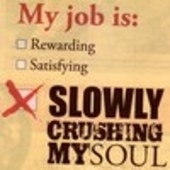 Working in diverse corporate cultures with the Fortune 100, small businesses and nonprofits as consultant and staff member, I’ve seen some vivid examples of stress.

Other than the impending terror of losing a job with a bloated mortgage and work overload beyond reason, here’s my Top Five (can you add more?):

1. Gossip. Triangulation and back-biting is only slightly less brutal than a dog fight. Several women executives have told me that it’s far worse with women employees, but I’ve also seen it with men. Managers, Directors, VPs, and yes, eve in the C-suite. This insidious practice snowballs in and between departments faster than an Obama Tweet announcing tax refunds.
2. Process. Inefficient coordination that wastes time kills spirit. Result: stress from spending two hours to do a half-hour of work, or from revising work that was done improperly. This includes processes that are too dependent on a “rock star” leader (the latest unfortunate exercise of ego), or too dependent on an ill-defined group without a coherent process with accountable metrics.

3. Communication. It’s not just that this is an expertise of mine, it’s a real stress beast in large and small organizations. Poor communication from the C-suite, from team leaders, and among team members spells disaster. Issues become nightmares, objectives become barriers, and anxiety swells bigger than credit default swap debt. Having a workload without clear communication strategy is like having the latest Mac Pro notebook without the use of the screen, or having an iTouch you can’t touch. Effective communication strategy and tactics are indispensable weapons for battling the stress beast.

4. Leadership. Lack of a clear mission and an inspiring vision will start a Tsunami of doubt that will crash into a flood of stress. People will drown in ambivalence, lack of motivation, lack of hope, and lack of confidence that their position or company has meaning or a future. Leadership doesn’t come from the hubris of certain Wall Street CEOs gaming to profit from the loss of others (charging taxpayers a high price for the “free” market philosophy); genuine leadership proves itself through innovation and vision which inspire others to do their best. This leads me to…

5. Engagement. Without an engaged workforce that believes in its mission and understands the value of its contribution, stress from any number of sources will grow like weeds in a foreclosed Vegas suburb.

Other stress catalysts, my Top Ten:

1. Bad coffee. And too much of it.
2. A new manager with something to prove.
3. A supervisor who dates your former spouse.
4. A CFO who keeps getting calls from Treasury Secretary Geithner.
5. No windows combined with small cubicles that have too many plants.
6. Keyboards sticky with sledge from other users.
7. An “updated brand campaign” every other month.
8. Internal news bulletin that “a new change initiative will save time”.
9. Meetings. Any meeting. Ever.
10. Company parties that involve Karaoke.

1) too often it is assumed that is has been accomplished.

2) the voices in our head drown out the words of everyone else.

Three froggies sat on a rock by a sunlit pond. One froggy decided to jump in. How many frogs were left?

How many times have we spent hours, months even, deciding what to do? We decide and then we decide some more. And if someone asks us how we are doing with our contemplation in deciding, we state we have made a decision. Bravo! they say. And then we stroke and fondle that decision or we fret and gnaw at it. We turn it over. Or we place that decision on a shelf and light it for all to see. We have decided! We feel very, VERY accomplished!! Because we brilliantly worked that problem to a decision.

And then we look around us and see no change. No difference. No action.

The next time you are faced with a decision, make certain the most important part of the decision, is the decision to act. And then do it.

Too often we are drawn to think about philanthropy and charities in terms of a softer, kinder model, less business focused. Because the product is not widgets, financial gains or consumables, but human caring, it is tempting to believe the business of philanthropy is just as soft and touchy/feelie.
Don’t get me wrong. I’m not being snarky about the work of charities. My heart is where they operate. I can think of no greater calling than to be working to help mankind. Truly. And I also believe that working to help mankind is not solely relegated to charities. Many businesses in the course of their work can, and have, effectively positioned their business model to acheive gains in their financial standing AND help mankind.
And so I believe charities can balance that concept as well. By this I mean, charities can help mankind and acheive significant financial gains. To do so, we need to think like a business. Just as business needs to think like charity to acheive their mutual ends.
A melding of concepts, could this be an evolution for two very seperate frames of thought in the MBA world?